Driftless Terroir (ter-WAHR) is a series featuring guest voices celebrating the intersection of land and culture — the essence of life in the Driftless Area — with topics including art and architecture, farming and gardening, cooking and eating, fermenting and drinking, and more. To read past columns, see voiceoftherivervalley.com. To contribute to Driftless Terroir, e-mail info@voiceoftherivervalley.com.

Bela! Bela!! Beeeellllaaa! Where did that dog go? It was late last fall and we had had our first light snow. The air was nippy and wet and the brush thick after a full summer and fall of growth. Leaves were still falling. Lots of berries for the birds still available: high bush cranberries, mountain ash, aronia, wild cherries and more. Bela had been gone for at least an hour, which is when I start my rounds to locate her.

I went to the usual places. The orchard where she eats a wide variety of fallen apples and pears. Or the vineyard where she finds rabbits. Or out beyond the fence in the tall grass prairie, where she finds holes through which to escape. Or under our truck waiting for mice or a chipmunk to pass by. And still no Bela.

As I was walking toward the woods I heard a low muffled bark. Then it stopped. I waited and then it started again but became fainter. There was a slight wind that took the sound and made it hard to detect her location. Then a loud bark. “Gotcha!” I thought. Making my way to the rocky ledge in the woods through a thicket and down the other side, I could hear muffled barks again and saw a tip of a tail. And then it was gone! “Yikes.” Bela was digging in a cave in a crevice of the beautiful sandstone rock outcropping. Her barks get fainter with each bark.

The outside of the rock was covered with lichen, mosses, liverworts and polypody ferns. This mesic section of the woods faces north, a nice moist shady environment for the plants to prosper. I am always amazed at the diversity of life from a hands and knees and “nose to the ground” perspective. The soil was sandy and fine.

By the time I got close to Bela she had dug a huge tunnel and left a large pile of this sandy soil outside the cave. I tried to grab her tail but she just went further into the cave barking. I knew I couldn’t get her. I went to get my husband, Michael, who usually rescues her from her escapades. Michael came down through the brush, down the rocks into the entrance to the cave and tried to grab her but couldn’t. He then went to the other side of the rocks to see if there was another entrance. He could see another tail and it wasn’t black like Bela’s. He couldn’t get Bela and the more he tried the further she went into the cave and wouldn’t back out. Michael said, “Get a shovel so I can dig some on the other side. I don’t want to leave her.” I tramped up the hill again getting pretty tired, got the shovel and came back down.

And then, chaos ensued. Michael had crawled into the cave on the side opposite where Bela entered and grabbed the tail of what was a possum. Just as I returned to this crazy scene, there is Michael pulling out the opossum, holding it in the air and then dropping it on the ground. It ran away right across my path. Bela followed the possum to the other side of the cave as Michael was pulling it out, and then he grabbed Bela. Once you touch Bela she relaxes as if “my job is done,” like nothing had happened and no one’s energy had been spent. “Whew! That’s over.” Almost.

“What is that smell?” The possum had defecated all over Michael’s pants. We noticed an interesting odor on Bela, too, a strong earthy green smell.

Bela returned super sandy from the cave soil. We noticed an interesting odor on her, too, a strong earthy green smell that persisted for a week despite repeated brushing and washing. Michael did a little online research and concluded it might be Geosmin in the soil, which is produced by the Actinomyces bacteria Streptomyces. Michael contacted a fellow at Colorado State University who confirmed this. This led to sending a soil sample from the cave to be sequenced for any bacteria as part of a citizen science project in the continuing hunt for new antibiotics. Streptomyces produces over two-thirds of the clinically useful antibiotics of natural origin, e.g., neomycin and many others. Geosmin is responsible for the earthy taste of beets and muddy-tasting catfish and that pleasant smell after the first rain.

And for our possum’s status, why didn’t the possum go into shock? He/she seemed high energy and scampered away. Most of the time my experience has been that they shock quite easily as a defense mechanism. It is an involuntary reaction and they recover in 40 minutes up to four hours. Because we had such a close encounter with the possum we did some further research to make sure there is not some disease exposure and were delighted to find that possums rarely have rabies, their urine is sterile and the smell comes out easily in the wash! Possums are important to have around for many reasons. Eating up to 4,000 ticks a week in our tick-infested region is one very good reason!

We have always lived with possums around our place. They seemed to have adapted to our changing environment quite well unlike many other animals who are no longer here, in decline or pushed out by other species or changes in habitat such as porcupines, grouse, foxes, Whippoorwills and others. That said, our bird population has increased significantly over the past 40 years and we recently caught a photo of a bobcat on our trail cam.

Living in the Driftless region provides endless opportunities for us to enjoy nature and learn about its natural treasures. Even though Bela found the possum’s home and interrupted its secret space, all is well.

Debi Morton lives on the ridge toward Dodgeville and owns Driftless Depot Organic Market, Deli & Café in Spring Green. She is a lifelong foodie, chef and advocate of eating seasonally. Debi and her husband are also organic and biodynamic growers of fruits and vegetables. Driftless area caretakers for 40 years.

Watching for Fire in the Sky

Driftless Terroir: In Praise of the Mating Rituals of Prairie Chickens

Where the Land Meets the Sky

Where the Land Meets the Sky

Throughout November, Peggy Timmerman is exhibiting her paintings in the Community Room Gallery and Don Lind is exhibiting his woodworking in the Glass Case Gallery at the Spring Green Community Library during regular library hours: 10 a.m.-7 p.m. Monday-Thursday, 10 a.m.-5 p.m. Friday, and 9 a.m.-1 p.m. Saturday. 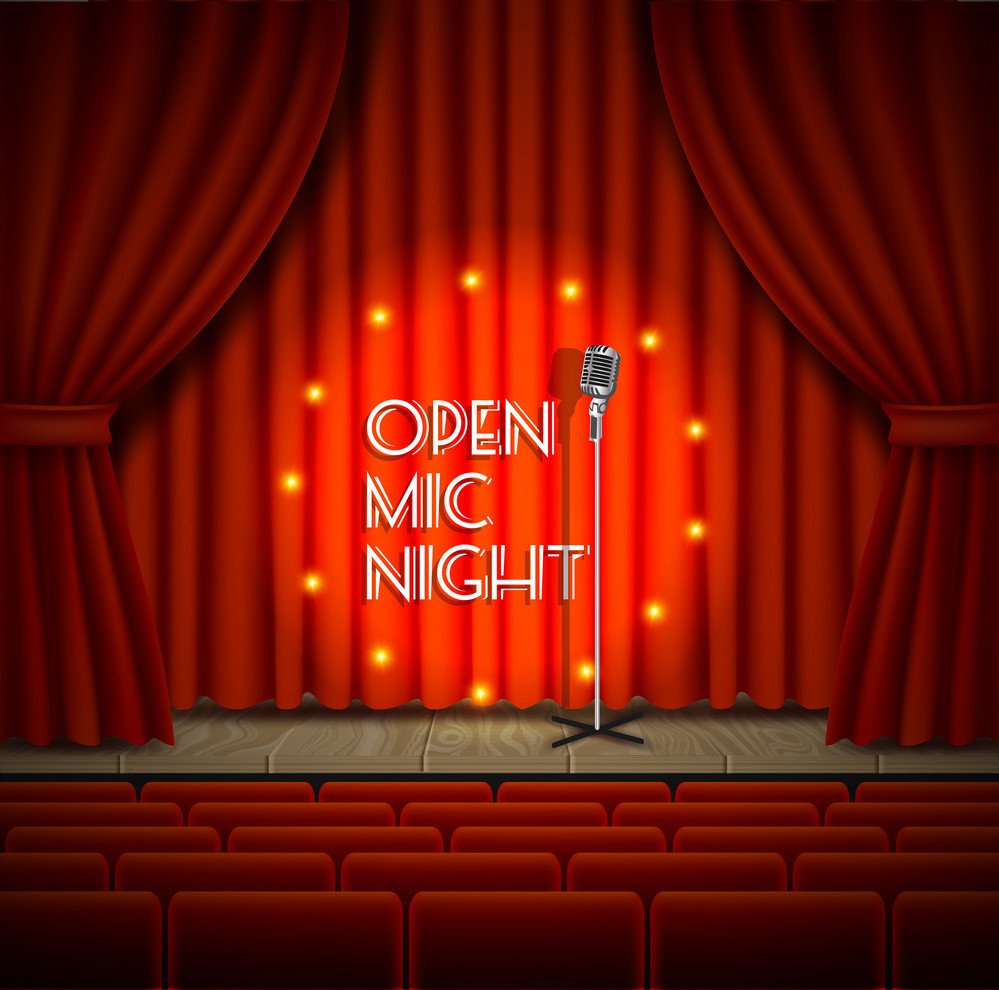 Virtual open mic is an opportunity for both those who live near Folklore Village and those who are far away to celebrate talent together, trial new works, and join a creative virtual community. Virtual open mic is held via Zoom on the first Tuesday of every month (unless the date conflicts with a holiday). For… 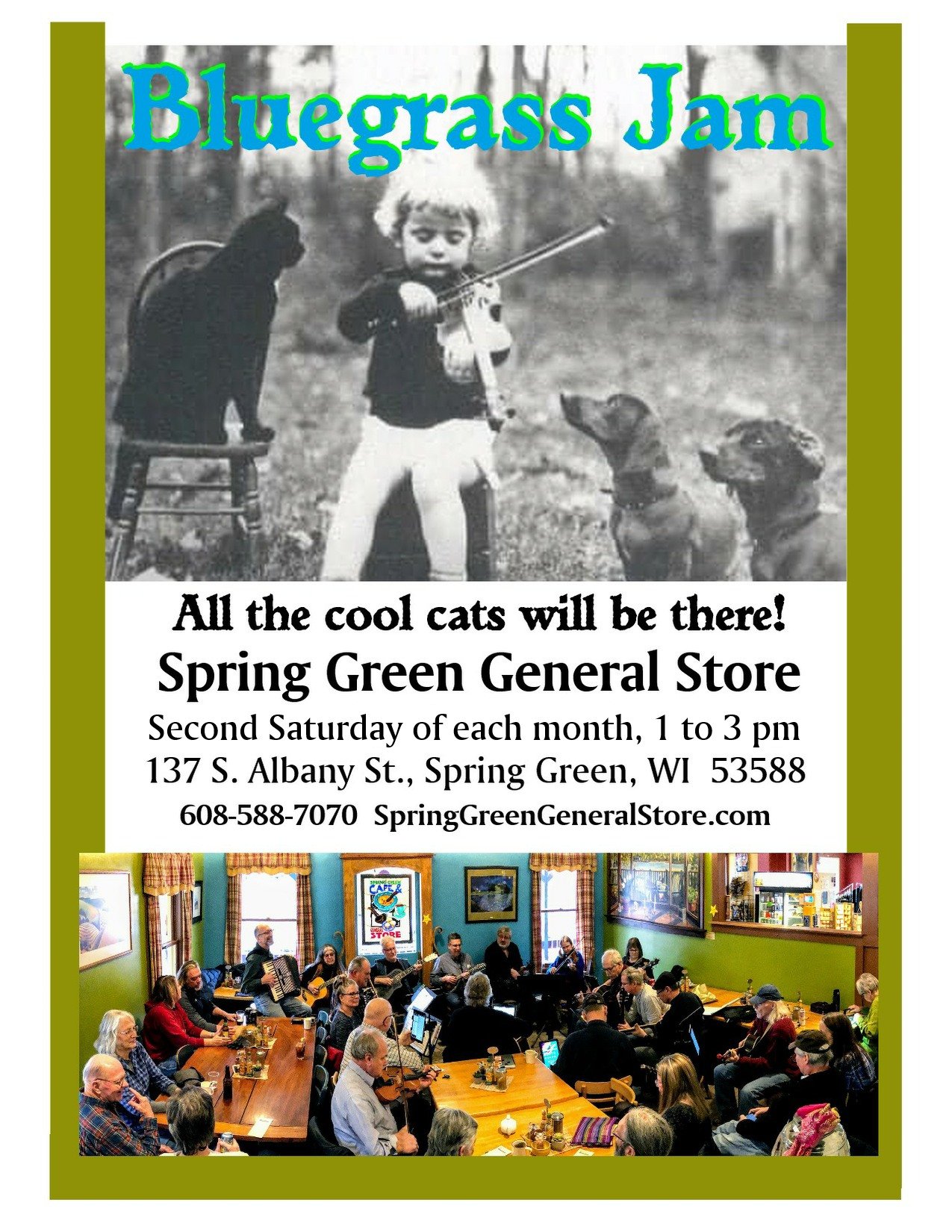 Bring your instrument and play along or come to listen at the Bluegrass Jam at the Spring Green General Store the second Saturday of each month. While the weather permits they'll be held on our back deck.  It's an amazing group of performers. 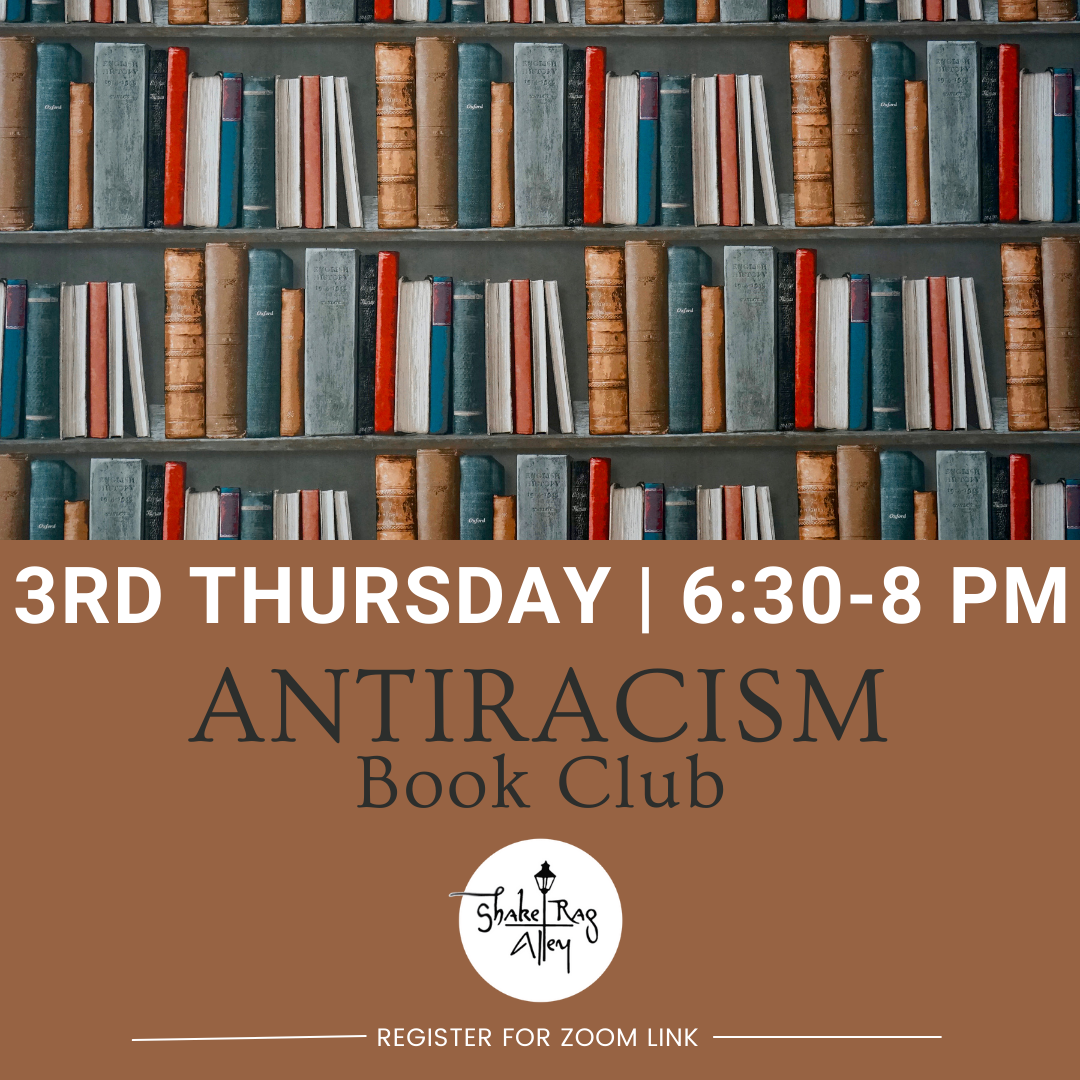 Antiracism is a transformative concept that reorients and reenergizes the conversation about racism — and, even more fundamentally, points us toward liberating new ways of thinking about ourselves and each other. Join the free monthly conversation centered around a new book selection every two months Jan-Feb: The Hemingses of Monticello: An American Family by Annette Gordon-Reed March-April: The…

Writers need readers: ideally from tentative first draft to hopeful last. Looking for a second pair of eyes? Why not six or 10? If you are interested in deepening your writing craft in prose—fiction and nonfiction, short story, novel, narrative journalism, memoir, essay, and more—this is the place to meet monthly for feedback and support.… 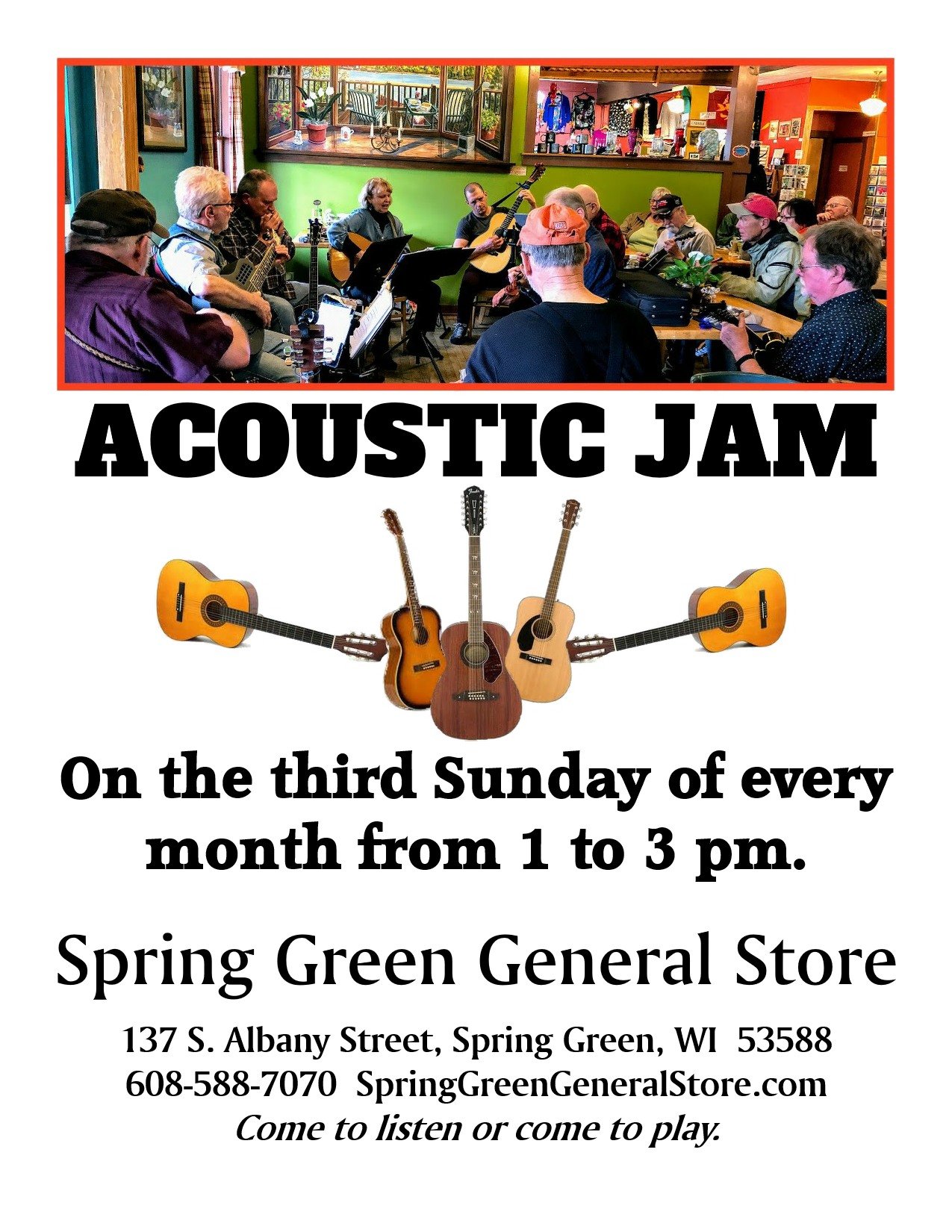 Come to listen or grab your instrument and come to play at the Acoustic Jam at the Spring Green General Store the third Sunday of each month. While the weather permits we will hold the jams on our new back deck. All are welcome.