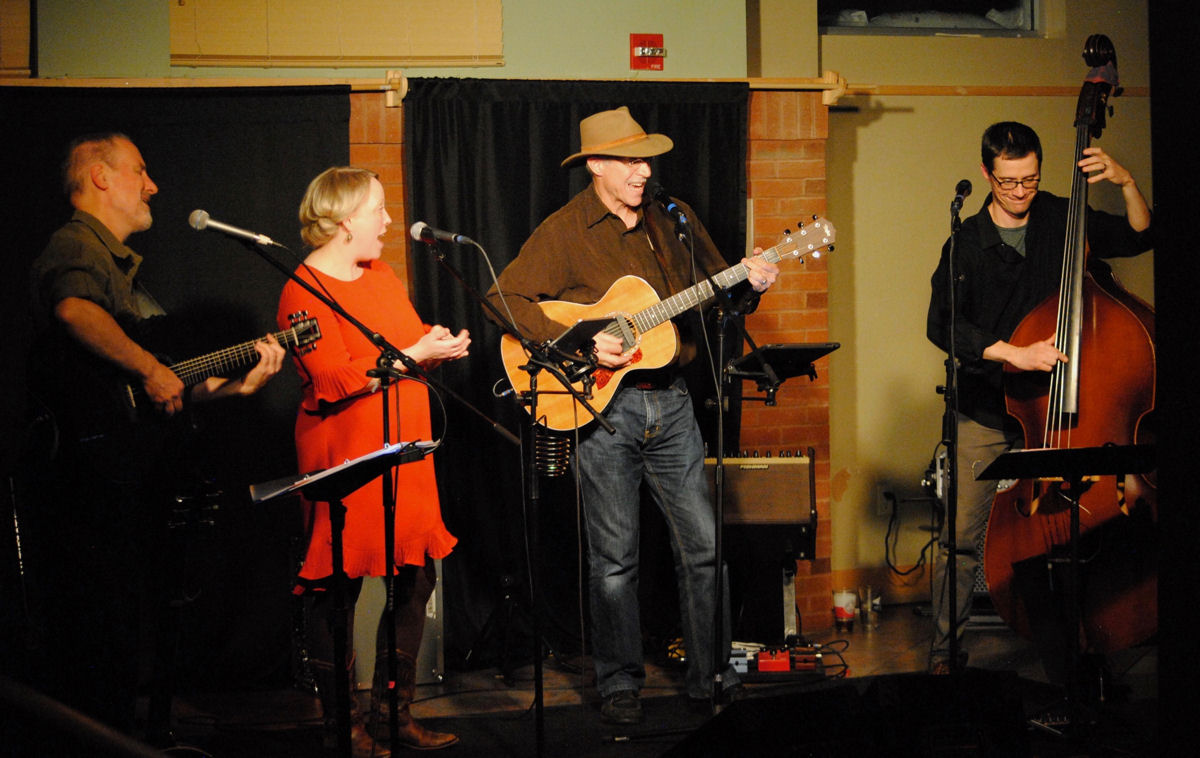 The Honey Pies is an exciting collaboration of Madison-based music veterans. Jodi Jean Amble made a major splash in the Chicago scene fronting her eponymous band —nominally jazz, but equally at home with, pop, country and more — and as a member of the highly eclectic ensemble Jenny Dragon. Tom Waselchuk leads the MAMA award-winning Americana band The Dang-Its and has performed for more than 20 years in a free-swinging guitar duo with multi-instrumentalist Doug Brown. Doug has long been among the most in-demand freelance sidemen on the Madison music scene in a variety of genres, as well as being a band leader, composer and arranger. Matt Rodgers is among southern Wisconsin’s busiest bass players, equally at home in most any style of music. Matt, Doug and Tom are all alumni of and have toured internationally with the Gypsy swing ensemble Harmonious Wail.

Displaying a formidable range of musical backgrounds and notable depth of experience, The Honey Pies apply crystal vocal harmonies and virtuoso instrumental skills to the best of traditional, contemporary, and original Americana music.

“The four members of The Honey Pies are all terrific musicians in their own right, but together their musicality shoots to new heights. The sound is free-spirited but amazingly focused and precise. And what a range of styles! This is not your typical three-chord country-folk band!” — Nancy Cullen, Rural Musicians Forum, Spring Green

“The Honey Pies have already been dubbed a fan favorite by our patrons. Although their covers are beautifully performed, where they truly shine is with their original music. The lyrics are catchy and engaging, the musicians are some of Madison’s finest, and the stage banter is adorable. A truly well-rounded show, The Honey Pies can make a small, intimate concert space come alive as well as fill a large performing arts center with their non-stop energy.” — Lindsey Giese, River Arts Center, Prairie du Sac

“This was our 13th annual concert and we have had excellent groups before, but this was our best ever. Everyone raved about what a great group and music. Many, many comments about Jodi Jean’s wonderful voice and the group’s vocal harmonies. (The) interaction with the audience was great — sure makes the concert feel so much more personal.” — Vicki Martin, Wild Rose Kiwanis Fundraiser

Jodi Jean Amble – “Elegant, subtlety sexy and composed, Jodi sounds and looks great on stage and literally has the crowd howling from her first song on. Her voice is inviting and draws the audience to her.” — Randy Freedman, Chicago Jazz Magazine

Tom Waselchuk — “I was blown away by his performance last night. I consider them among the best musicians we have had on our stage.” — Marv Nielsen, Blackhawk Folk Society