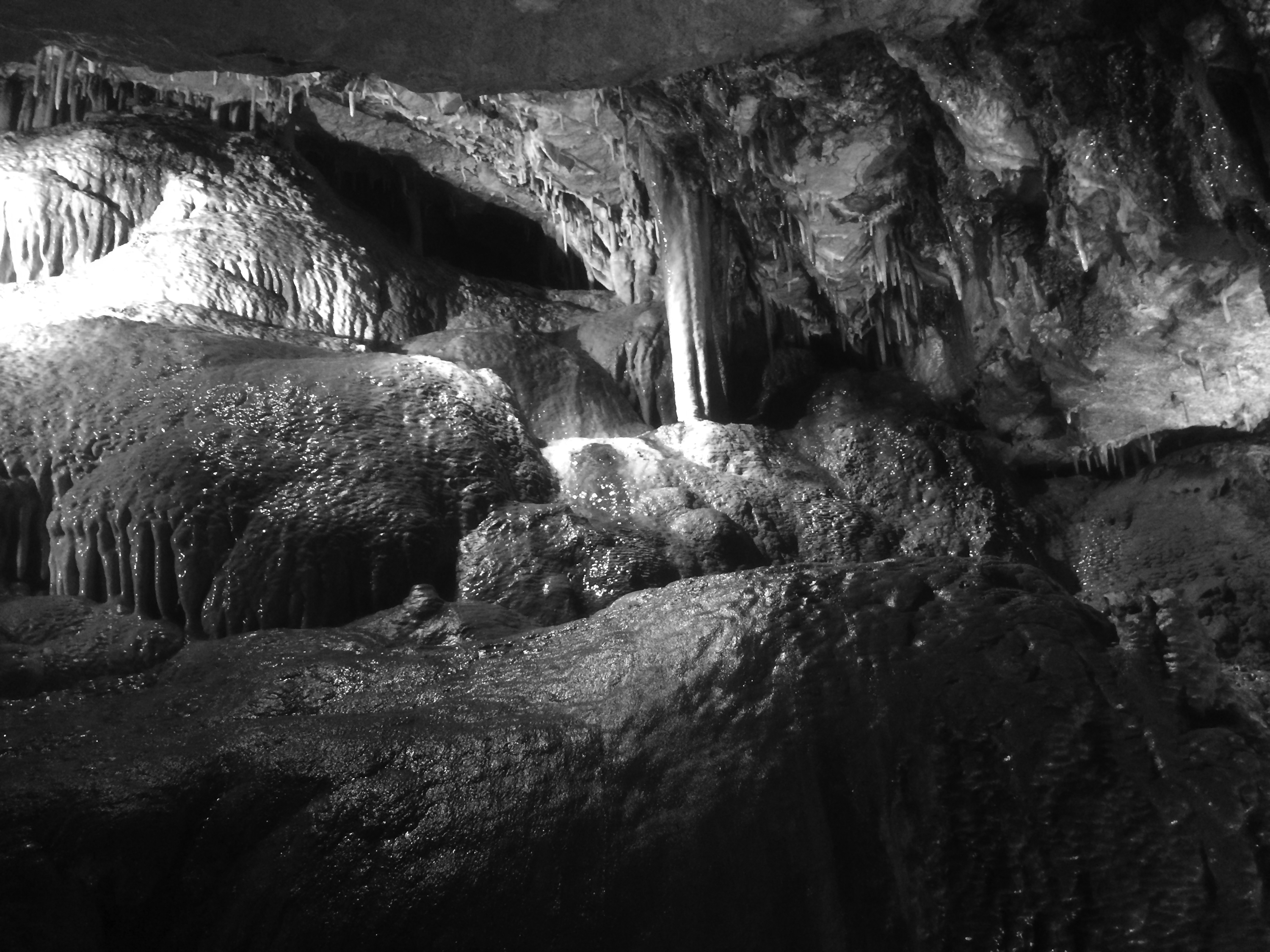 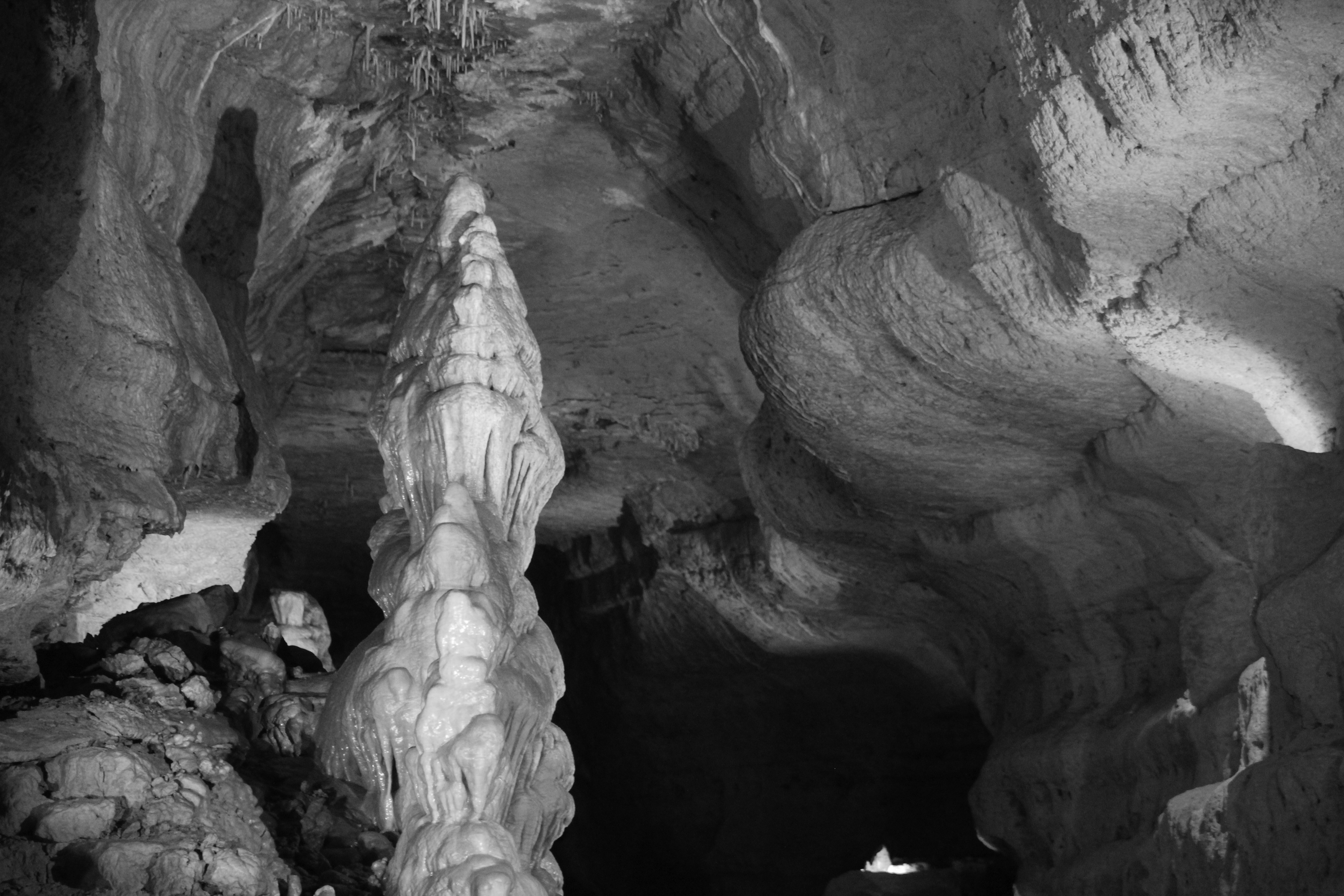 Driftless Terroir: A Juicy Realm Down Below Where the Sun Never Shines

A million or so years ago, acidic solutions dissolved out a cavernous void in the Galena Limestone near Blue Mounds. Today, Cave of the Mounds is the most accessible of our region’s caves, featuring ornate subterranean spaces and 52-degree temperatures year round.

Driftless Terroir: A Juicy Realm Down Below Where the Sun Never Shines

Cave of the Mounds Speleothems

Fantastically colored stalacmites and flowstone at Cave of the Mounds.

We live in karst territory. Above ground, Driftless Area hill country expresses itself in a system of branching cold mineral water creeks; but this seemingly coherent surface picture belies an obscure and magical subterranean waterworld of crevices, caves, caverns and underground streams. These dark drainages are a wonderland of natural history, and are well established as the natural habitat of fine preserved fermented foods like cheese, beer and wine throughout human history.

In a hidden artistic order of ornate subterranean architecture, distinct realms are at once both linked by chutes and waterways, but are also independently defined by their own geology, topography, climate and microbiotic signatures. Insulated from the warmth of the sun, caves maintain a constant temperature of 52 degrees F. At the surface, kids wading barefoot through creeks on numb feet among the watercress and trout experience cave temperature. Other hydrologic evidence at the surface also allows us to induce this realm of caves exists — but only rarely do we enjoy the opportunity to actually experience caves as architectural space in the few places where they daylight.

One such place where we can is Cave of the Mounds near Blue Mounds, the highest hills of southern Wisconsin. To be named a National Natural Landmark, “a site must be one of the best examples of a natural region’s characteristic biotic or geologic features” — and Cave of the Mounds was indeed so designated in 1987. It was discovered by accident in 1937 under a farmstead that had been owned a century earlier by  prosperous lead-mining pioneer and Black Hawk War commander Ebenezer Brigham. A quarry blast opened a doorway into the otherwise completely sealed cavern where “no man, no beast, no bird, no bats and no snakes” had ever found access, in the words of geographer and cave manager Alonzo W. Pond in the early 1940s.

There, about a million-and-a-half years ago, rainwater that was naturally acidified slightly by carbon dioxide exploited a fissure and dissolved away a cavernous pocket of native limestone — which is not as hard as it would seem since limestone is made up of rather soluble calcium carbonate. In the last million years, the water table dropped and the cave-filling water was replaced with air, allowing lime-rich water to slowly drip into a void to form fantastic calcium carbonate edifices. These secondary deposits are called speleothems (from Greek speleon, a cave; them, deposit).

Thin hollow mineral soda straws ornament the ceilings, and flowstone resembles draperies on the walls and frozen ripples on the floors. Stalactites point downwards, stalagmites build upwards and columns are constructed where the two meet. Spatter droplets form oolithic pearls on the cave floor, or lily pads on pools. The building up of calcium carbonate creates undulating layers of banding in the speleothems that resembles onyx, and in the 19th and early 20th centuries the term “cave onyx” described material considered desirable for architecturally ornamental purposes. Like ivory in elephant country, cave onyx was subject to poachers who ripped off stalactites and stalagmites, leaving broken stumps behind. Even the most well-meaning explorer contributes carbon dioxide, yeasts, molds, fungi and bacteria to the cave environment, contaminating the native population of flora, and this is the reason access to many caves is now closely guarded by scientists who seek to understand them quantitatively.

Cave of the Mound’s parent rock is mineral-rich Galena Limestone, formed out of the limey gunk that accumulated on the shallow seafloor when much of the North American continent was submerged and teemed with marine organisms in the Ordovician Period some 488 million years ago. In some places, the migrating solutions that drip through the “Life Line” fissure at the top of the cave display intensely red, orange, black and white colors from passing through all the Galena Limestone has to offer, including Mississippi Valley Type zinc and lead sulfide deposits that have made this formation famous. Iron oxide, manganese oxides, various sulfates and other minerals are transported and may recrystallize into splendidly colored speleothems like “bleeding stalactites,” and a variety of minerals from calcite to araganite to gypsum. Huge amounts of calcium carbonate are moved in solution, creating speleothems at a rate of 1 cubic inch per 50 to 150 years.

For those of us stuck up here on the surface, having calcium carbonate and sulfate in the water is great for brewing light English ales, but not Pilsners. It is also great for building strong plant cell walls, but makes hard water deposits on our faucets and washbasins — impelling some to set up a manmade water softening system. Brewers, wineries and cheesemakers increasingly replicate cave environments with soil-covered concrete or stone structures to achieve the temperature, humidity and native diverse flora conditions of caves to impart a character of place that controlled settings can’t. More ancient and culinarily adventurous cultures use actual stone caves for food fermentation and aging, sans plastic paneling — which makes for the most complex flavors and stunning still-life terroir compositions. In the vein of this aesthetic idea, Cave of the Mounds in November offered a sold-out Cave After Dark event featuring tastings of Wisconsin cheeses and wines.

Beyond romance, karst topography and its hidden waterways can hold unsavory implications for human life and health. Any chemical and biological runoff that makes its way into a subterranean channelway has no opportunity to be filtered by soil before entering a karst aquifer — a fact that has led to initiatives to map crevices and to draft guidelines for what to do on the surface nearby to safeguard groundwater.

Karst topography is one more influence on life in the Driftless Area that renders this place distinctive. Our place-based observations can inform a nuanced approach to managing its land, and a style of living befitting its grandeur both above ground and below. For our troubles, we are rewarded with bounty, beauty and a very welcome variety.

Erik Flesch is a Taliesin-trained architectural designer and former geologist living in Mineral Point with his wife, Sara, and can be reached at erik@driftlessterroirstudio.com.

Save the date to meet and hear from award-winning Wisconsin authors during this year's free Winter Writers Reading Series (donations welcome!). Nancy Jesse won the Wisconsin Writers Association Jade Ring in fiction for her short story “Notes to the New Facilitator of the Reminiscence Writing Group at Sunnyvale Retirement Community.” She grew up on a…

Save the date to meet and hear from award-winning Wisconsin authors during this year's free Winter Writers Reading Series (donations welcome!). Tom Pamperin was awarded first place in the Wisconsin People & Ideas Fiction contest by the Wisconsin Academy of Sciences, Arts, and Letters for the short story “In Rock Springs When the Angel Trumpets…

Acoustic River is a group of musicians including Ned Hodgson, STS and Mike Anstett. We do acoustic versions of songs from the '60’s to the present! And original songs! We blend finger style with rhythm and lead work on both six- and 12-string acoustic guitars.

The Mining & Rollo Jamison Museums presents archeologist Dr. Timothy Scarlett of Michigan Tech’s Keweenaw Energy Transitions Lab (KETL). Dr. Scarlett will explain the potential applications of evolving energy technologies and the ways in which heritage practices and policies can be key to the future partnerships to facilitate the electrification of everything. KETL has been…

Save the date to meet and hear from award-winning Wisconsin authors during this year's free Winter Writers Reading Series (donations welcome!). DeWitt Clinton won the Council for Wisconsin Writers Edna Meudt Poetry Book Award for "Hello There." Clinton is the author of "The Conquistador Dog Texts" and "The Coyot. Inca Texts" (New Rivers Press), "At…

The Mining & Rollo Jamison Museums presents a panel of regional energy experts from Badger Hollow Solar, RENEW Wisconsin, and the electricity transmission industry sharing updates on major renewable energy projects in the region, talk about why these projects are happening here, and discuss what impacts they have on our economy, environment, and communities. To…

Save the date to meet and hear from award-winning Wisconsin authors during this year's free Winter Writers Reading Series (donations welcome!). Jennifer Morales was awarded the Council for Wisconsin Writers Zona Gale Short Fiction Award for “The Doorman,” published in the anthology "Fire & Water: Stories from the Anthropocene," by Black Lawrence Press. Morales is…

Soul Purpose performs at the Spring Green General Store in March! Join us for some fun, lively and soothing acoustic music that will make you smile on a late winter's day. Soul Purpose features four singer/musicians and will be performing familiar arrangements of popular music, standards, oldies and much more.No cover; donations appreciated! See Soul…